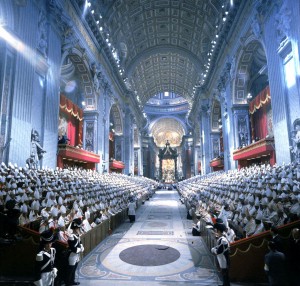 As this sacred Synod searches into the mystery of the Church, it calls the spiritual bond linking the people of the New Covenant with Abraham’s stock.

For the Church of Christ acknowledges that, according to the mystery of God’s saving design, the beginnings of her faith and her election are already found among the patriarchs, Moses, and the prophets. She professes that all who believe in Christ, Abraham’s sons according to faith, are included in the same patriarch’s call, and likewise that the salvation of the Church was mystically foreshadowed by the chosen people’s exodus from the land of bondage. The Church, therefore, cannot forget that she received the revelation of the Old Testament through the people with whom God in his inexpressible mercy deigned to establish the Ancient Covenant. Nor can she forget that she draws sustenance from the root of that good olive tree on to which have been grafted the wild olive branches of the Gentiles. Indeed, the Church believes that by his cross Christ, our Peace, reconciled Jew and Gentile, making them both one in himself.

Also, the Church ever keeps in mind the words of the apostle Paul about his kinsmen, who have the adoption as sons, and the glory and the covenant and the legislation and the worship and the promises; who have the fathers, and from whom is Christ according to the flesh ‘, and the son of the Virgin Mary. The Church recalls too that from the Jewish people sprang the apostles, her foundation stones and pillars, as well as most of the early disciples who proclaimed Christ to the world.

According to the apostle Paul, the Jews still remain most dear to God because of their fathers, for he does not repent of the gifts he makes nor of the calls he issues. In company with the prophets and the same apostle, the Church awaits that Day, known to God alone, on which all peoples will address the Lord in a single voice and serve him with one accord. ‘2

Cardinal Bea drafted the first text of the Declaration of Nostra Act at the request of Pope John XXIII.