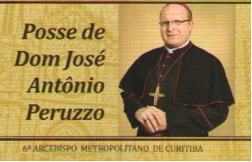 We would like to share with you what we experienced on the evening of March 19, the solemnity of St. Joseph. Since his name is José Antonio (Joseph Anthony), our new archbishop chose this date for his installation at the head of our diocese. The celebration was very beautiful and the cathedral was full! Many priests and bishops, deacons, men and women religious, lay people and official people; his parents, his sisters, as well as delegations from the dioceses where he has worked. Dom Odilo Scherer, in the name of the pope, gave him the crozier. It was very beautiful.

We discerned about whether we would also go to the dinner. We decided we would, since we would be representing Sion: from the Solitude: Sr. Angela Margarida, Sr. Diva and Sr. Celia; from the apostolic sisters: Sr. Anna Maria and Sr. Ana Cristina; and from the high school: Sr. Livia and Maria Cecilia Piccoli, an associate.

At the restaurant in the Italian Santa Felicidade quarter, all three of us went to greet our archbishop. He asked us what our Congregation was. We answered: Our Lady of Sion…, and we couldn’t go on, because he interrupted us, raising his arms and saying: “Ah! Everything having to do with Israel delights me!” He has a doctorate in biblical studies. We could explain to him that we are of the contemplative branch. In his homily, he called the priests, the men and women religious and the lay people to prayerfully read the Word, saying that if the Word of God is not central, no other word has any value.

The atmosphere was one of great joy and hope.