Our proximity to the “Roots” of the Congregation 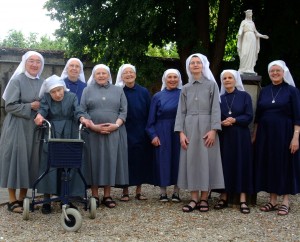 At the end of his “Memoirs” Fr. Theodore wrote: “How can one notadmire God’s hand in the founding of Grand-Bourg?” It was founded inJuly 1850, right after the opening of the first houses of Sion in Paris, and itbecame a living spring for the Congregation. Fr. Theodore was very partial

to this land, God’s gift to Sion through Mr. Révenaz, to its beauty, “itsinvitation to simplicity, above all to the intimacy of the family; he liked allof Sion to meet there, and that was then a feast!” (M. Carmelle, volume 2, p. 50). For thirty years he walked in the huge park under its trees with dense foliage, often in the company of Fr. Marie. In his letters to the sisters, he mentions with humor the donkey he called Bethphage, the goat, theox. Already at his first visit, he decided that he would be buried there; his garden chair is still chained down inthe cemetery. To the original house – a large two-storied building – other houses were added over the courseof the years according to the needs of the school. Before the end of 1850, Fr. Theodore decided on the placeof the chapel. It was inaugurated in 1854.

Mr. Révenaz had made his gift with the explicit condition that a school and a dispensary be opened in Evry. The building was constructed already in 1857 and blessed on October 8, 1858. Nine years later, anotherclassroom was added on as well as a workshop where the young girls of the village could be formed aslaundresses or seamstresses.

In May 1862, the Congregation bought a country house opposite the park from a certain Mr. Dumas; it wascalled “La Solitude” [The Solitude]. As the school was expanding and a large community occupied the roomsin Grand Bourg, Father Marie and Father Theodore liked to stay there. In one of his letters, Fr. Theodoreinvited a novice to bring “her large scissors” when she came so as to prune the rosebush that he had plantedand which is still there. This house is where the first eight contemplative sisters came to live after the FourvièreHill on which they had been collapsed. We often have the joy of welcoming Sisters and Brothers ofSion who come from all over the globe, and we let them

discover or visit again the grave of Fr. Theodore and those ofthe first Mothers, of Sisters whom we knew and loved and whotraced for us the path of fidelity; this small patch of land towhich Fr. Theodore loved to come, his room, that of Fr. Mariewhen he stayed between two trips to collect funds for the houses in the Holy Land.

We are united in friendship with the high school opposite ourhouse. In addition to the annual visit by “new” teachers gettingto know Sion, we work together with one or another of themin order to pass on to the young people as well as to the adulte the message received by Fr. Theodore for the Church and the world. The presence within our walls of the “memory room” is a privilege, which allows for a good reading of our history.